Premieres 16 September on Peacock (US) - no UK channel as yet

In early 2000s, the world went wild for Dan Brown’s series of page-turners featuring Professor Robert Langdon. His high-octane and controversial tales of religious symbols and iconology soon made it to the big screen with the Tom Hanks’ films The Da Vinci Code, Angels & Demons and Inferno.

Intriguingly, the cinematic run skipped the 2009 book, The Lost Symbol. Columbia Pictures did indeed begin production on that novel but as a final script neared completion, they passed on it, unable to shape the novel to their satisfaction. Director Ron Howard said: “Cinematically, when Lost Symbol came out, I think our feeling, my feeling was that it’s a terrific, another terrific novel. It’s great material, but it felt like, coming close on the heels of Angels and Demons and Da Vinci Code, that thematically and tonally, it might feel a little bit too much like the other books, at that particular moment. [Inferno] immediately felt like a cinematic next step, and that excited us.” Which is a polite way of saying Dan Brown was basically recycling the novels with different locations and symbolic hokum.

It seems a decent passage of time to revive the novel as a 10-episode TV series. The producers have also taken the decision to make it a prequel to events of The Da Vinci Code and Angels & Demons. For those who don’t know the book, The Lost Symbol sees the discovery of a severed hand placed in the Capitol’s Rotunda. It turns out to be that of Robert Langdon’s mentor, Peter Solomon.

REASON TO WATCH: Who can resist a treasure hunt of Masonic symbols?

WHO IS IN IT? Ashley Zukerman (Succession) plays Robert Langdon and Eddie Izzard (Ocean’s Thirteen, The Avengers 1998) plays Peter Solomon

The first season of The Morning Show was an expensive spin of the dice for fledging streaming service, Apple TV+, but one that eventually paid off.

Set around the fevered world of an New York early morning TV news broadcaster, the drama explored the workplace dynamics between men and women (and between women) against the shockwaves of the #MeToo movement. Starring Jennifer Aniston and Reese Witherspoon, the first series was nominated for 3 Golden Globes and 8 Primetime Emmys with the brilliant Billy Crudup winning the gong for Outstanding Supporting Actor in a Drama Series.

The storylines of the first season ended abruptly with UBA network being thrown into chaos when Alex (Aniston) with Bradley (Witherspoon) using their live broadcast to expose the network for hushing up sexual misconduct and allowing a toxic culture. The eagerly-anticipated second season reportedly explores the huge follow out from that on-air reveal.

Reese Witherspoon revealed “We’re just beginning because there’s a whole new world order. It’s chaos. No one knows who is in charge. What does leadership mean at this point? And I think that’s what we’re exploring in this culture as we speak.“

REASON TO WATCH: The Morning Show’s gaze sharply examines the zeitgeist. Expect the coronavirus pandemic, the 2020 Presidential election and racism to feature.

WHO IS IN IT? Jennifer Aniston, Reece Witherspoon, Billy Crudup all return as does Steve Carell. Julianna Margulies (ER, The Good Wife) and Greta Lee (Russian Doll, Wayward Pines) join the cast.

Ever since the televisual juggernaut Game of Thrones graced our screens, TV execs have been hunting for another title to fill that expansive Epic Saga box.

Foundation is the latest attempt and if nothing else it’s a bold one. David S Goyer, who wrote the story for The Dark Knight trilogy of Batman films, has the task of adapting revered sci-fi novelist, Isaac Asimov’s sprawling “Foundation” saga. In book form, it spans the original trilogy of books followed by two sequels and two prequels. First problem: the story itself spans a thousand years. And characters come and go. Not the stuff of TV or cinema. And then there’s the thorny problem of portraying “a thousand worlds” – that’s never going to come cheap.

Potential adaptations have come and gone. Columbia Pictures attempted a movie version in 2009 but Roland Emmerich, writer of big-screen spectacles like Independence Day, Godzilla and The Day After Tomorrow, couldn’t wrangle a satisfactory screenplay from the source material. Jonathan Nolan, who created HBO’s Westworld TV series, was reported in 2014 to be attempting to bring the Asimov novels to the small screen but again, nothing materialised.

Apple certainly lapped up David S Goyer’s pitch: “It’s about a 1000 year chess game between Hari Seldon and the Empire – and all the pieces between them are pawns, but some of the pawns become over the course of this story to kings and queens.” If successful, the ambitious showrunner has plans for an 8-season arc (80 episodes) to tell the whole Foundation saga.

REASON TO WATCH: With two episodes costing the same as a movie, Foundation is going to be a treat for the eyes. And Game of Thrones meets Dune by the way of Star Wars is a hard proposition to resist.

WHO IS IN IT? The wonderful Jared Harris (The Crown, Chernobyl) plays Hari Seldon who develops the predictive mathematical power of “psychohistory”, Lee Pace (The Hobbit trilogy, Guardians of the Galaxy) plays Brother Day, the Emperor of the Galaxy and newcomer Lou Llobell plays Gaal Dornick, Hari Seldon’s obvious successor. 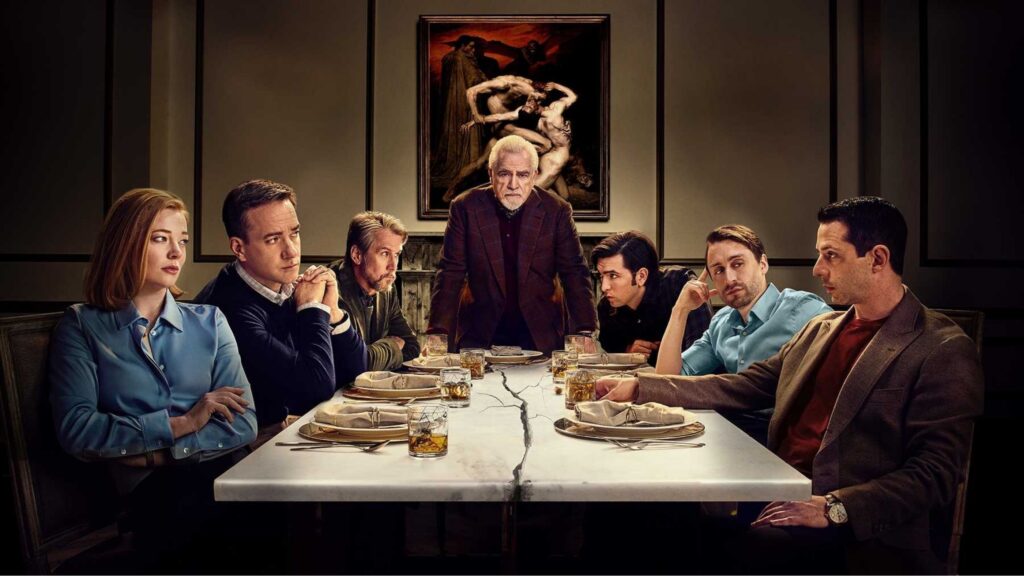 The fights and feuds of the toxic Roy family return for a third season and we cannot wait! Succession Season 2 ended on a jaw-dropping high when Kendall Roy had been asked publicly to sacrifice his reputation to save Waystar Royco – instead he dropped a bombshell at the press conference branding Logan Roy as “a malignant presence, a bully and a liar.”

Not unlike The Morning Show featured earlier, Succession has thrown the narrative pieces in the air with viewers eager to tune into the third season to see what will emerge from the chaos. From the delicious trailer, it is clear that the ensuing corporate battle is heading for one bloodbath of a familial civil war.

REASON TO WATCH: “You tell him I’m going to grind his fucking bones to make my bread” – yes Brian Cox returns to chew whatever scenery that remains from the two previous seasons.

WHO IS IN IT? All members of our favourite dysfunctional family return but we can look forward to Adrien Brody (The Pianist, The Grand Budapest Hotel) as a billionaire activist who becomes central in the Roys’ corporate battle and Alexander Skarsgård (Big Little Lies, The Legend of Tarzan) as a confrontational tech CEO.

The Great was a surprisingly funny and occasionally rather moving stealth hit of 2020 – an irreverent, bawdy “anti-historical” retelling of the rise of Catherine The Great, Empress of Russia.

When we left events, the not-yet-great Catherine had the dilemma of either taking Peter’s throne by force or saving her great love, the lovely Leo, from death.

When we rejoin the action, *SPOILERS* Catherine has taken her place on the throne and continues with her rarely-popular ambition to bring enlightenment to Russia. On top of that, she is still struggling with conflicting feelings about her husband Peter. In the trailer, he asks how she is – she replied “At war with you!”. As if that’s not enough issues, is that Catherine’s mother, Joanna, we spy?

REASON TO WATCH: If season two can deliver the excess, the misdirection and the hot history that season one did, we will raise a vodka with a hearty  За здоровье!

WHO IS IN IT? Elle Fanning returns as Catherine. Nicholas Hoult is back to add charming and nuance to the boorish Peter III of Russia. And excitingly Gillian Anderson (The X-Files, The Crown, The Fall) joins the cast as Catherine’s glamorous but chaotic mother.

The shows that have featured so far in what is called Phase Four of the Marvel Cinematic Universe have been somewhat varied. WandaVision was an impressive and imaginative narrative on the power of grief that explored narrative depths rarely seen in comic book adaptations for the screen. The Falcon and The Winter Soldier was standard fare while Loki occasionally faltered in its mission to explain the mechanics of time travel and the multiverse ahead of next year’s Doctor Strange movie.

Which brings us to Hawkeye. From what we can gather, the series follows the events of Avengers: Endgame. Following the trauma of the ‘blip’ – which was when half the population disappeared after Thanos’ Snap and were restored five years later without ageing a day (or something) , Clint Barton/ Hawkeye just wants to give his kids a proper Christmas and make up for lost time. Yeh, like that’s going to happen!

REASON TO WATCH: We’re getting distinct Die Hard vibes from the trailer. And that glimpse of Rogers: The Musical, a Captain America musical on Broadway, is getting a big Yes from us. If you still need convincing, Hawkeye will also feature Lucky the Pizza Dog!! The only dog to my knowledge who got an entire comic issue told from his canine point-of-view. Good doggo!

Extra Dramas Not To Miss 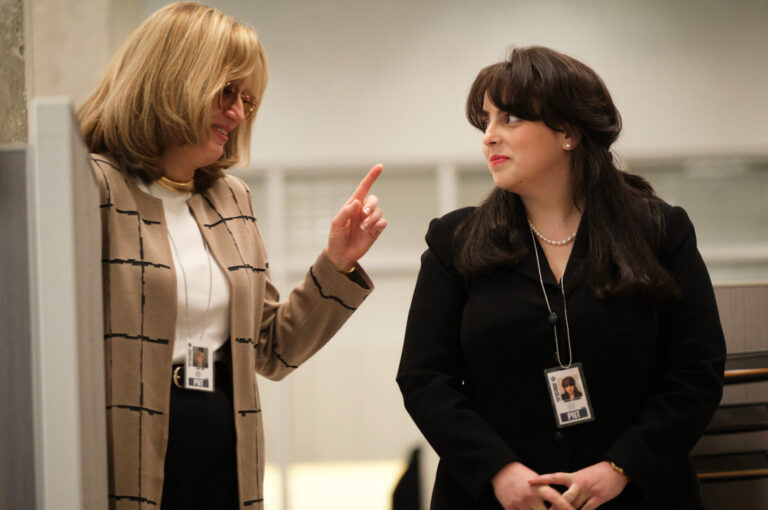 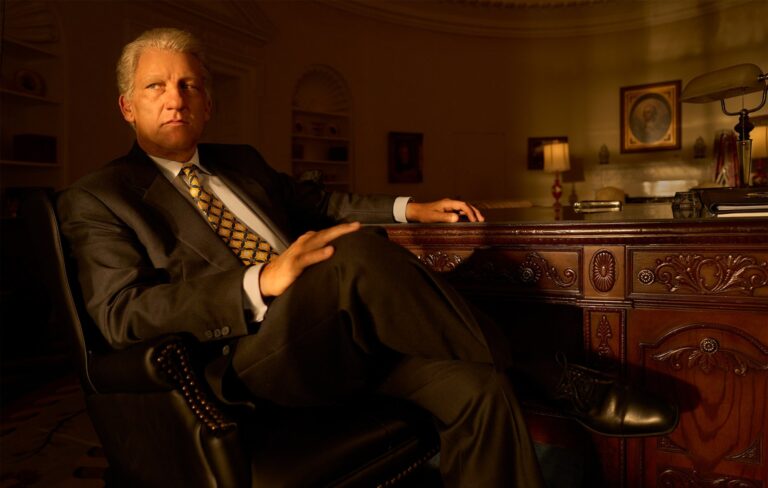 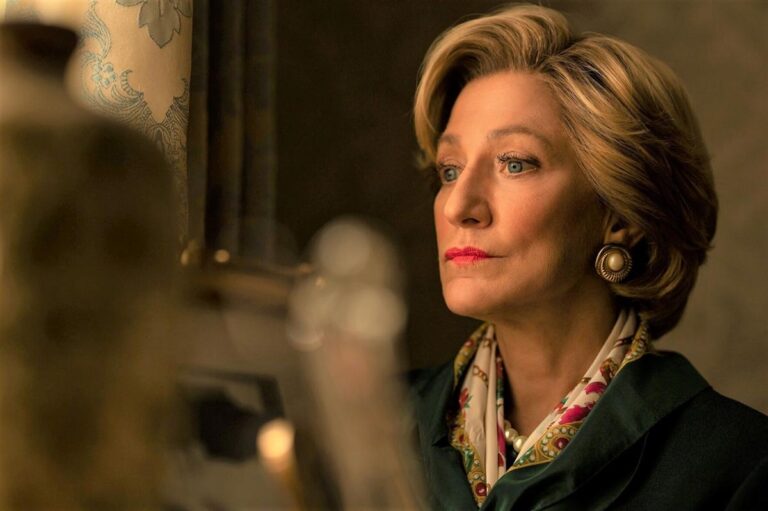 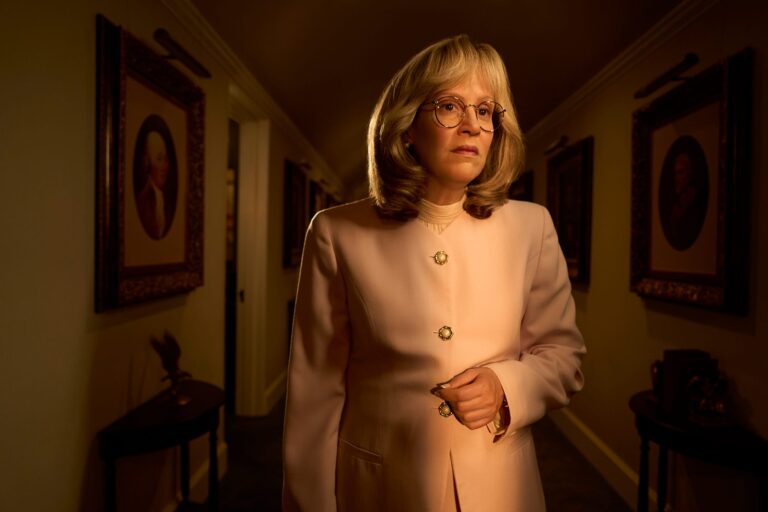 Premiered 7 September on FX - no UK release as yet

The third installment of Ryan Murphy’s ACS takes a compelling look at the Monica Lewinsky scandal that rocked the Clinton White House in the 1990s.

WHO IS IN IT? Sarah Paulson (Ratched) is a star turn as Linda Tripp, Clive Owen (Children of Men) is a suitably lecherous Bill Clinton, Beanie Feldstein (Lady Bird) gives a sympathetic take on Monica and we’re expecting fireworks from Edie Falco (The Sopranos) as Hillary Clinton. 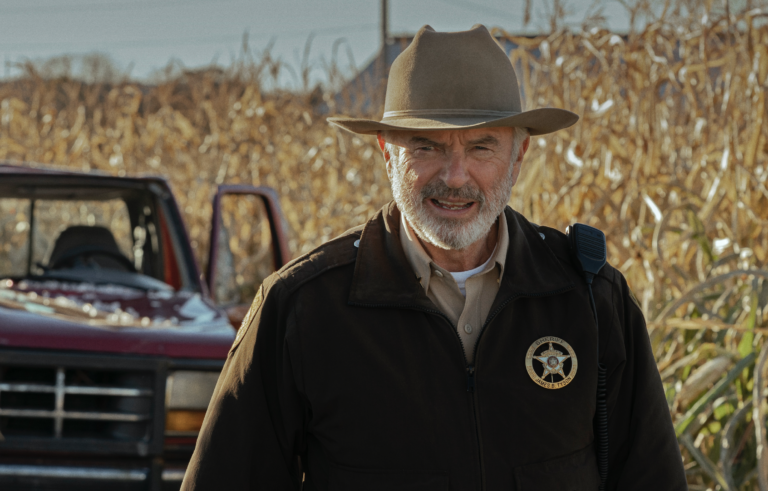 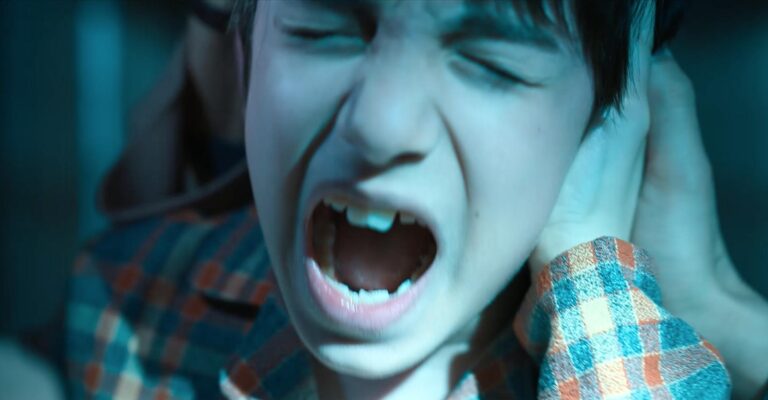 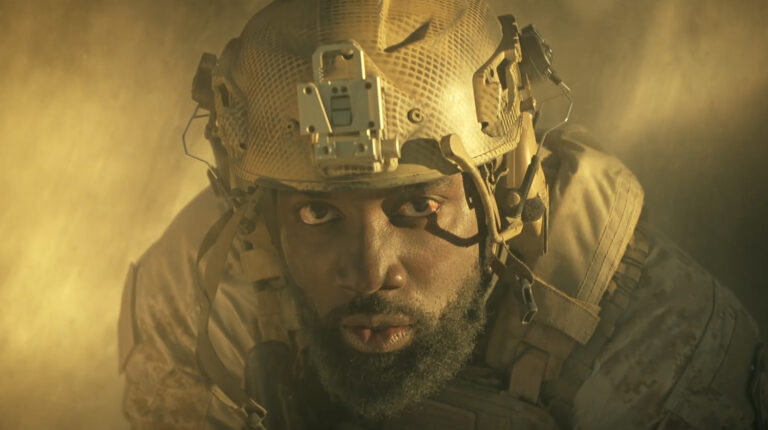 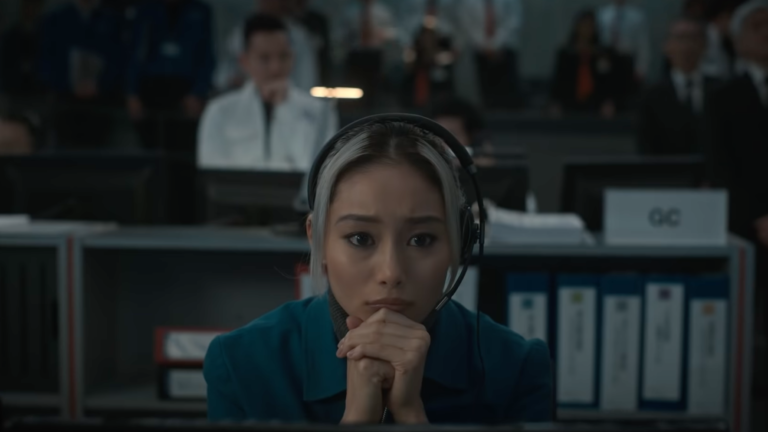 Follows a global alien invasion across multiple continents through the eyes of five ordinary people showing different perspectives around the world.

WHO IS IN IT? The ambitious series has a cast that includes Sam Neill (Jurassic Park), Shamier Anderson (Wynonna Earp) and Golshifteh Farahani (The Patience Stone)