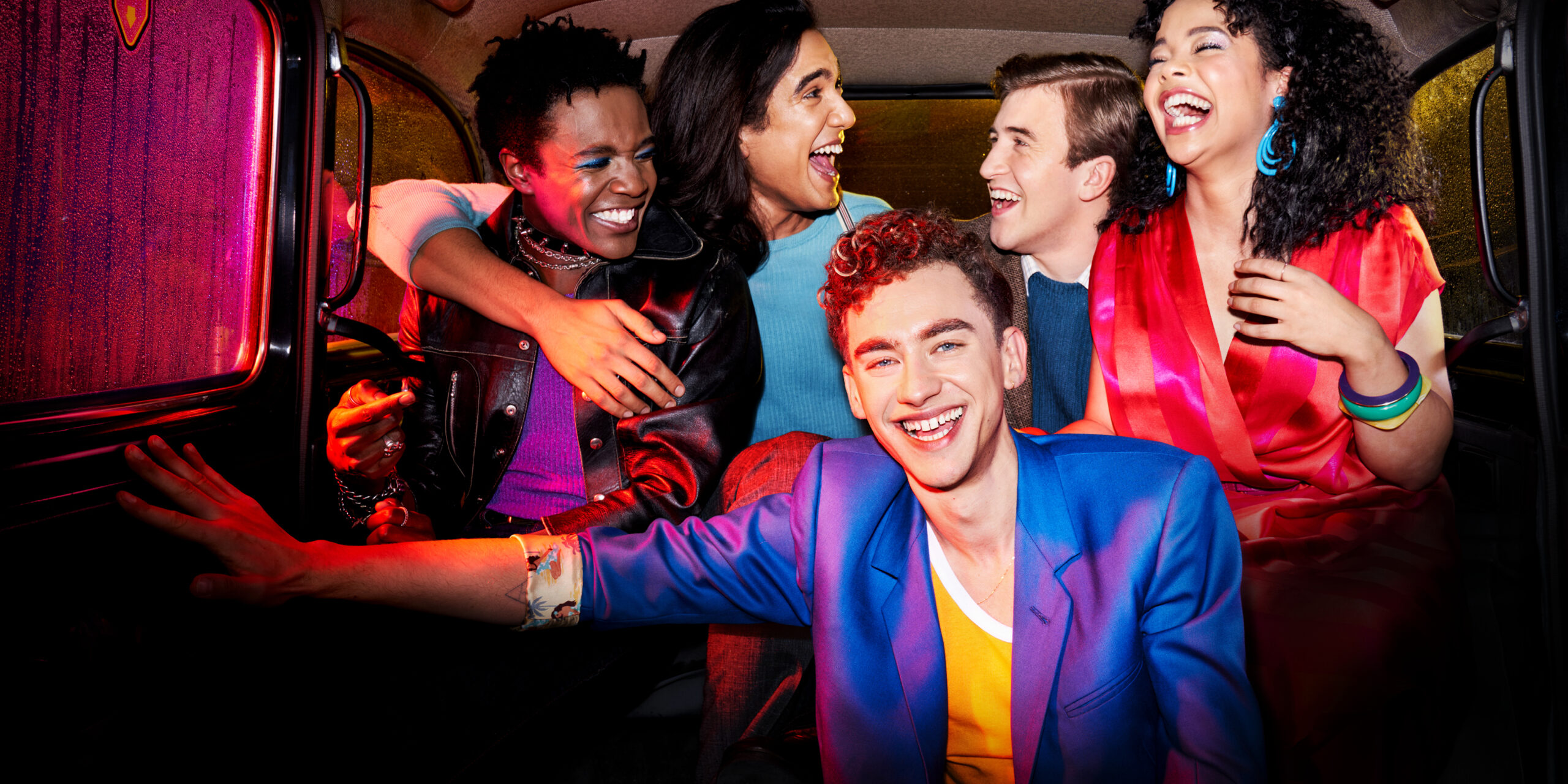 Back in 1999, Channel 4 launched a show about gay men living in Manchester. It was bold. It was contemporary. It was sexy. There had been nothing like on British television. It was Queer As Folk and for the first time, the gay scene was depicted proudly, wittily, attractively and unapologetically in living rooms across the nation. 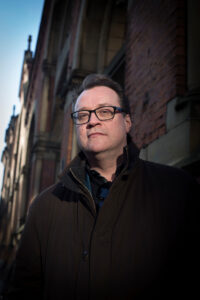 Written by Russell T Davies, it caused a furore. Predictably the Daily Mail called for it to be censored: “Certainly we shouldn’t be at liberty to watch naked actors having relentless homosexual sex”. Even the left-leaning newspaper, The Mirror clutched its pearls, exclaiming “the bare bum count is heading for an all-time record” (an encouragement to view if ever there was one). However, it struck an empowering chord for gay men who had at best seen only a desexualised, ‘safe’ representation of themselves on screen.

Fast forward twenty-two years and Russell T Davies has a new tale of young gay people, albeit one set in 1981 and the subsequent years. It’s A Sin follows the lives of five youngsters as their lives converge upon a flat in a giddy, hedonistic, optimistic London, ignorant of the looming threat of a deadly disease that will impact their world.

Being a script of Russell (not inconsequentially the man who returned Doctor Who as a hugely popular series), this is a drama of strong characters, quotable dialogue (if your twitter feed isn’t filled with “La” are you even gay?) and relatable scenes that are nothing to do with intellectual musing and everything to do with emotional responses.

Set in the ’80s – indisputably the best era of music ever – It’s A Sin has an irresistible soundtrack. The drama itself is named after the 1987 Pet Shop Boys’ classic which Neil Tennant wrote about the education he got at a Catholic secondary school.

Whilst it features euphoric dancefloor classics such as Kelly Marie’s Feels Like I’m In Love (boo boo), Divine’s You Think You’re A Man and Hazell Dean’s Whatever I Do (Wherever I Go), the soundtrack of 80’s clubland isn’t always throwaway.

There’s an early scene in Episode 2 where Ritchie mocks the news from America of this virus that is killing gay men: “the whole thing is a pack of lies”, “how is a cancer gay? Is it pink? Is it in the wrist” and “they want to scare us and stop us having sex and make us really boring because they can’t get laid”. While ostensibly his diatribe is set against a thumping disco beat, the song is Do You Want To Funk? by Patrick Crowley and Sylvester. Here’s the history bit: Crowley was a producer who helped create the Hi-NRG genre of disco music – he died of AIDS in 1982 when this track was released. Singing on the track was Sylvester, a flamboyant, falsetto performer who became best known for the disco hit You Make Me Fell (Mighty Real) – he became an activist against the spread of HIV/AIDS and died of complications from AIDs in 1988. There’s musical foreshadowing for what’s to come for some of our protagonists.

Have to say, Hooked On Classics, a bizarre 1981 hit of classic music to a disco beat (to vaguely quote the Pet Shop Boys), as the accompaniment to a gay shag-a-thon montage  in Episode 1 wasn’t the most-expected experience of 2021 but we’re happy to run with it.

But not all is doom and gloom. In search of their Equity card, Jill and Ritchie perform the Yazoo anthem Only You (although WARNING it may have the Flying Pickets’ backing *shudders*).

Keeley Hawes is Everything!

We know Keeley Hawes for a variety of very diverse roles: she was the ballsy psychological profiler DI Alex Drake in Ashes to Ashes, the dodgy, violent DI Lindsay Denton from Line of Duty, the plucky matriarch Louisa in The Durrells and the ambitious and controversial Home Secretary (can you imagine one of those!) Julia Montague in the ratings-busting Bodyguard. 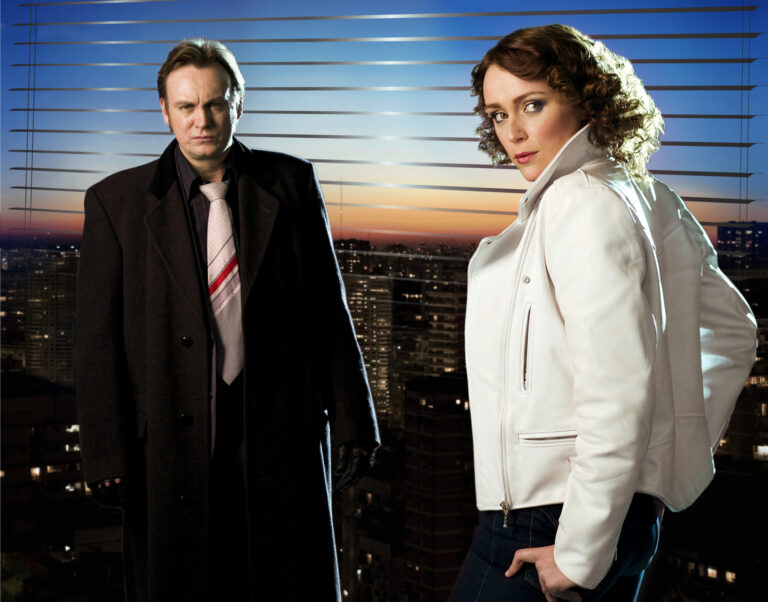 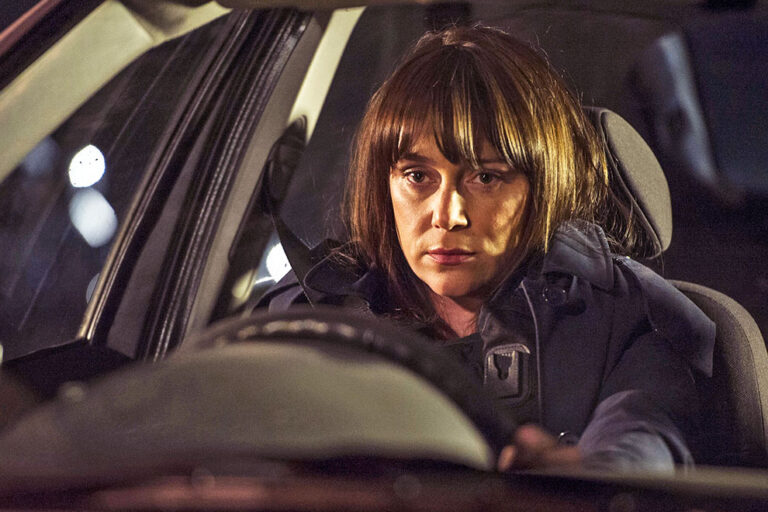 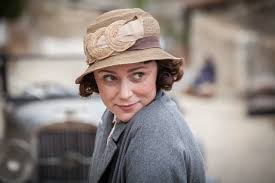 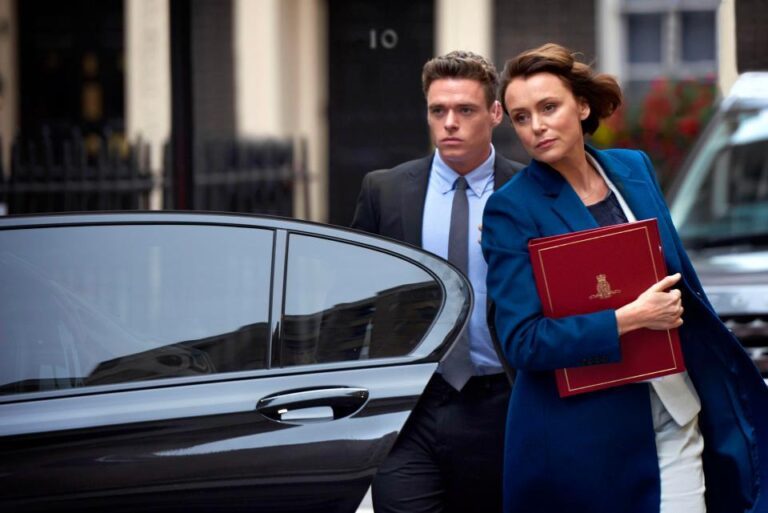 She has been nominated three times for a BAFTA, but following her role as Valerie Tozer in It’s A Sin, Keeley should be making a space on her mantlepiece for all the awards that will be coming her way. What a character journey she delivers over the course of the five episodes.

From the start, we see Valerie in a domestic setting of the Tozer family home on the Isle of Man. She’s seen as a naïve Mum who doesn’t know her son, Ritchie, is gay in spite of the weight of evidence before her eyes. She’s the Mum who smooths over any embarrassment caused by his blunt, narrow-minded father. The one who’s always at the other end of the telephone checking that her son is okay.

By the final episode, when Valerie and Clive turn up unexpectedly at the hospital where their son is. The shock that her son is not only gay but now has AIDS sends her into a tailspin of rage and denial. She roams the ward’s corridors, every relentless click of her court shoes echoing out a march of a woman whose world is collapsing around her, furiously demanding answers from everyone. Everyone except the one person who has them.

It’s an extraordinary performance by Keeley. She is Lear raging against the storm. Valerie in the ferocious combustion of grief, denial and anger is terrifying and unpredictable. And then she does the unthinkable: she insists that Ritchie stops his treatment in London and return to the Isle of Man under her care, banning his friends in the process. Her selfishness is breathtaking and yet, in the dexterity of Hawes’ performance, while you might not sympathise, you do understand why Valerie is behaving as she does.

It’s a portrayal that leaves you shell-shocked. BAFTA, are you listening?

Remarkably for a period piece that was commissioned in 2018 and concluded filming in 31 January 2020, Russell T Davies’ story of AIDS in the UK has striking parallels to the current response to the Covid-19 crisis.

Both AIDS and Covid-19 first ping on people’s radar as something that is happening far away, in other countries, with little cause for concern. When the diseases finally hit our shores, initially what is known from a medical perspective is sketchy.

As it spreads and becomes more of a conscious threat to the wider public, ill-informed scare stories and conspiracy theories abound as well as people refusing to take it seriously.

How different is Ritchie’s Episode 2 railing against the “propaganda” than the disinformation spouted by Covid deniers. “It’s a moneymaking scheme for drugs companies” espouses Ritchie though it could quite easily be found by a Covidiot on Twitter. “They say it was created in a laboratory” he continues. Sound familiar? “How do I know it’s not true? Because I’m not stupid. Which means I don’t believe it.” He concludes that “that’s what they want you to think, that lot. They want to scare us, and stop us having sex and make us really boring basically because they can’t get laid“. Allison Pearson, Laurence Fox, and Julia Hartley-Brewer would be proud.

Beyond these parallels, the show has evoked a strong emotional response. Tweet after tweet, post after post, talks of crying their way through episodes, needing to steel themselves for a tough watch and being heartbroken by the end. 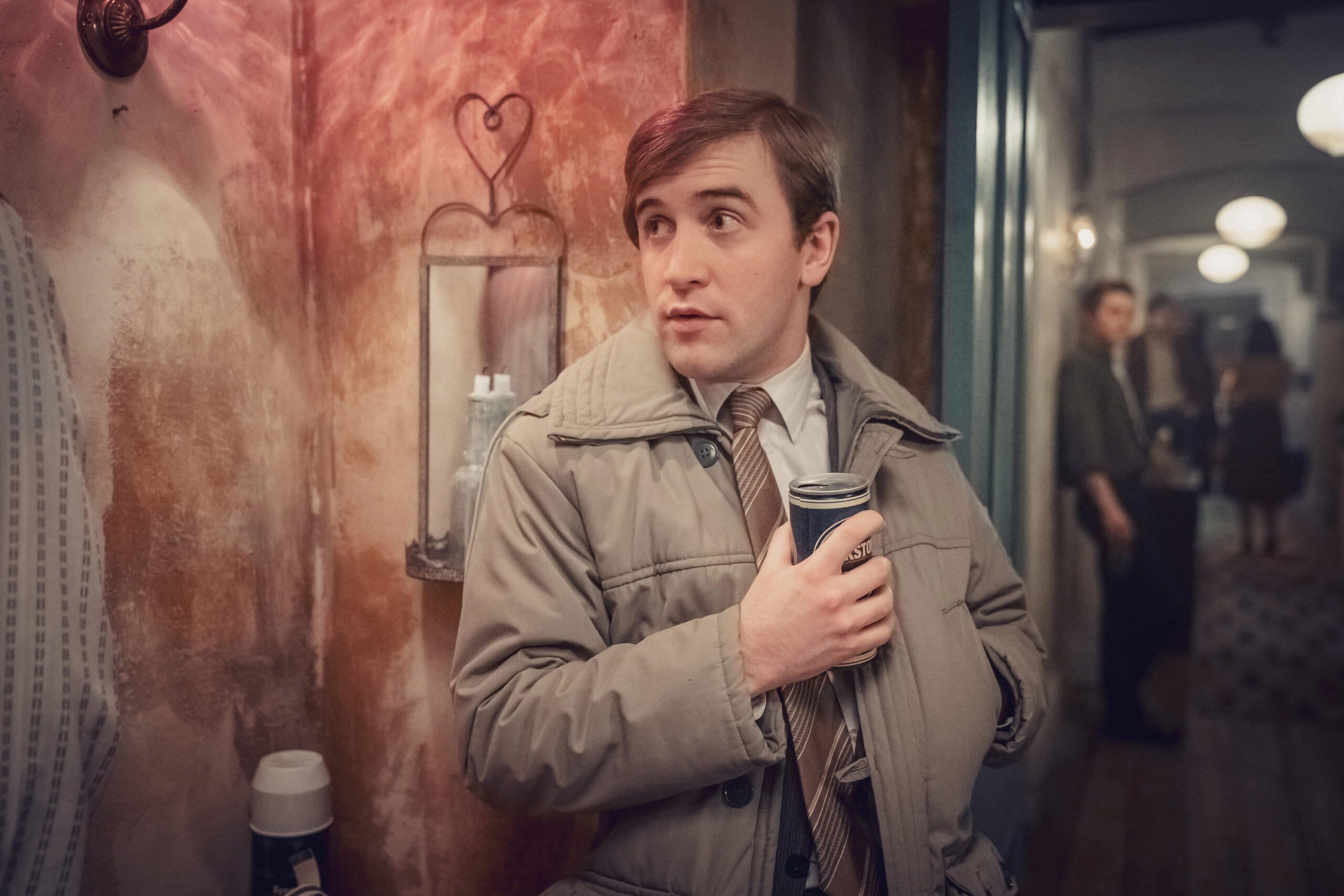 The show has characters you care about. Take Colin: we go from “Another pint for the bender, please” to his mother getting dogshit delivered to her, to the final sucker-punch how he contracted it. Humour then sadness, laughter then tears, life and…

And as we cry for the lovely souls in the show, it feels a perfect reason to allow ourselves an emotional outpouring. The pandemic and the lockdown has made us uniquely vulnerable and often lost how to respond. It’s A Sin has offered us the perfect excuse to let it all out.

Daleks... It's got bloody Daleks!

When we sat down to watch this eagerly-anticipated gay drama of AIDS in the UK in the 1980s, I can’t say the arrival of Daleks was high on the list of our expectations.

Well it is Russell T Davies and as they say “You can take the boy out of Skaro…” (that’s one for the Whovians). 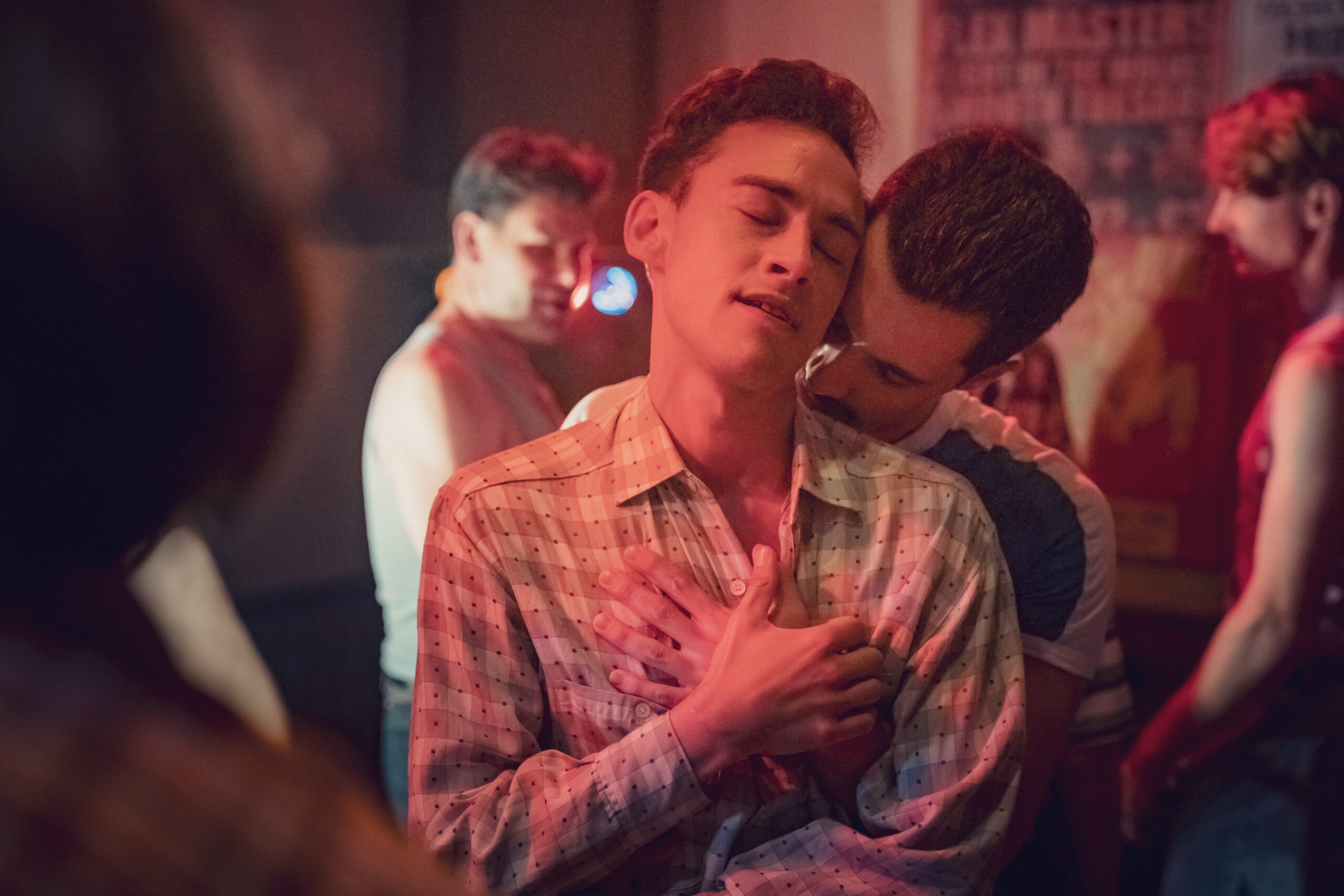 Watch It's A Sin on Channel 4