The Act is one of those unusual examples of queer filmmaking that is a period drama – depicting a diverse Queer community in the 1960s.  It’s the story of a gay man who can no longer live in the shadows.

When we first meet Mr Matthews (Samuel Barnett), he’s a bureaucrat in an insurance firm, working in his office. It’s the picture of middle-class conformity. A perfectly ordinary man, living a lie, hiding his sexuality and suffering silently for it.

When his stylish secretary Deardrie (Tracy-Anne Green) excitedly states she is going dancing “up West” with the girls on the switchboard, you can sense Matthews’ yearning. He is coming to the realisation that there is more to the world than he’s been allowed to see.

Taking the plunge, he heads to a discrete bar in the backstreets of Soho whose only sign to the outside world is a neon pink flamingo. Inside a bustling, colourful world of non-conforming is opening up to him. It’s a world headed up by the wonderful Edna-May (Cyril Nri), a lipstick-strewn, Polari-speaking, flamboyant older gay man, who holds court in this gay haven. “We are all family here” he tells Matthews reassuringly.

Getting on a soapbox here. Short films often convey a thought or a feeling but rarely tell a story. Where The Act succeeds, it tells every high and low beat of a gay love story – within 18 minutes!

Originally a successful play by Thomas Hescott and Matthew Baldwin, EastEnders‘ screenwriter Pete Lawson has distilled into an emotional screenplay that speaks of two men learning to accept and be proud of who they are in a time where such love was forbidden.

The Act is a story of love. A story of sex. A story of politics. A verbatim voiceover taken from the House of Commons debate over homosexuality is threaded through the short film. It provides the context against which the characters are trying to live their lives. “Effeminate, depraved and exhibitionist” and that was an MP speaking in support of homosexuality!

What Pete Lawson’s script delivers is the thrill and fear of coming out and accepting your own journey – of course, which is still a part of every LGBT person’s journey. With humour, The Act tells a timeless story of falling in love with someone and being prepared to face the consequences of that love.

Ultimately The Act is the love story of Matthews and Jimmy. And Samuel Barnett (Dirk Gently’s Detective Agency, The History Boys) and Simon Lennon (Bridgerton, Emmerdale, Our Girl) give fantastic performances, delivering every nuance that such an illicit love demands.

Unlike so many LGBTIQ+ dramas, The Act doesn’t peddle tragedy-porn (*side-eyes* It’s A Sin with a somewhat arched eyebrow). As Samuel Barnett told The Stage newspaper: “He’s just a man living his life who happens to be gay, whereas, even today, gay characters tend to have tragic endings in plays, books or TV shows. They have to be dying of AIDS-related diseases, or get beaten up, or something else horrible. That’s not the case here.”

The film dares to give its protagonists **SPOILERS** a happy ending and how refreshing is that?

The Act is a tender, heartfelt, sexy, political, cinematic short film that reminds us of the LGBT community who changed the world for those that came after. As such, it’s a must-see at the BFI Flare. 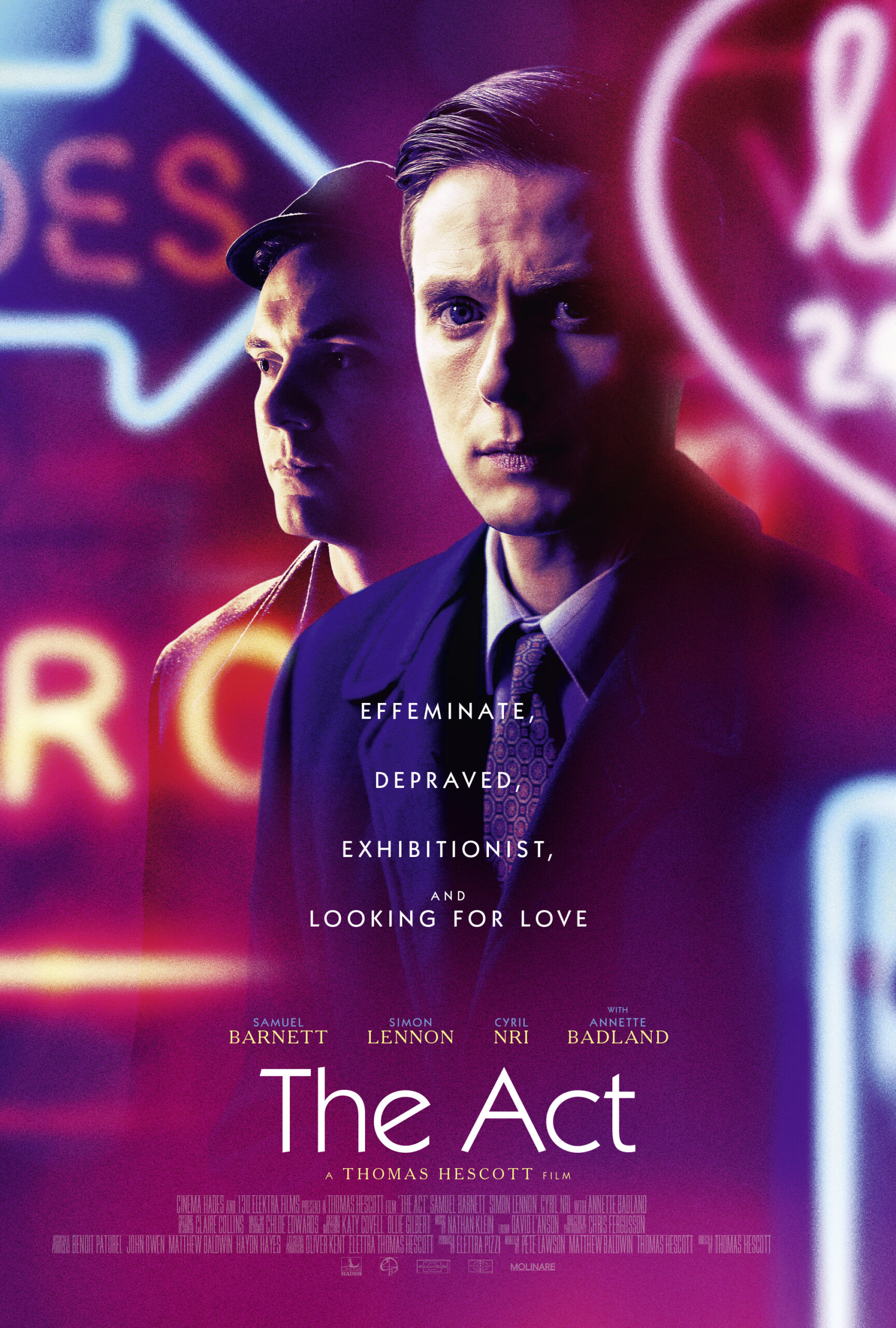 Watch The Act at BFI Flare!

The Act is a British short film that explores the lives of gay men in 1965 as male homosexuality was decriminalised. It stars Samuel Barnett, Simon Lennon, Annette Badland and Cyril Nri.